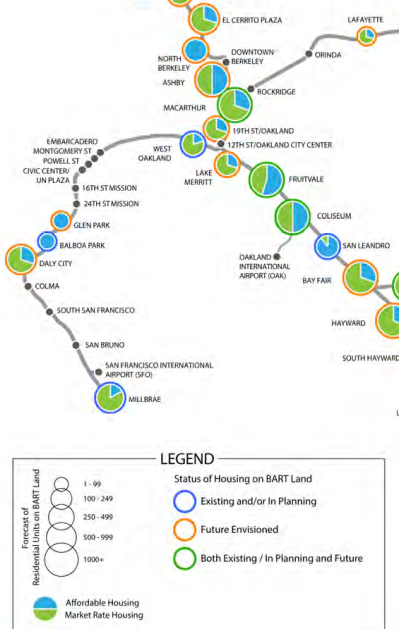 Tomorrow May 29th, Berkeley City Council will be considering a resolution penned by Councilmembers Maio, Hahn, and Mayor Arreguin that positions the City of Berkeley in opposition to AB-2923, which would allow BART to build 100% affordable housing at the North Berkeley BART parking lot. East Bay for Everyone is asking its membership to Show Up and denounce this callous act of disdain for the underhoused people of the Bay Area.

It is a fairly straightforward bill that applies a tiny modification to state law with massive implications.

It would allow BART to establish zoning guidelines over land they own, and require cities to implement those guidelines in their own local zoning within two years of adoption. If cities don’t respond within those two years, then BART gets to make its own zoning to override a city’s inaction.

It tries to strike a balance between local control and the need for regional benefits that the billions invested in BART stations provide to be made available to as many people as possible. Maio’s resolution flys in the face of this and EBFE’s vision of an inclusive future for the bay area.

At the recent North Berkeley BART community meeting hosted by Councilmember Maio, the majority of the voices present demanded we turn the parking lot into affordable housing, many demanding the maximum density possible. As we all know, subsidized affordable housing only can happen in dense developments; smaller projects are simply unable to compete for local, state, and federal funding grants. It isn’t great but this is the reality of today.

The area surrounding North Berkeley BART is a wealthier than average community that has experienced no new multi-family development. For decades, local planning has limited the concept of “mixed income” development to introducing high salary earners into low income communities (aka gentrification). Think 20% affordable housing projects where the majority are able to afford market rates. That isn’t fair to low income community members seeking access to the grand opportunities found in wealthier neighborhoods such as Rockridge or North Berkeley BART.

Opportunity hoarding is a major contributor to the ever-widening gap between the securely housed and the houseless. Mixed-income housing shouldn’t only mean adding wealthy people to a poor community; it must include adding those with fewer opportunities to areas with high opportunities. Building several hundred affordable homes in North Berkeley does exactly that.

Affordable housing makes the biggest impact on peoples’ lives when we build it in expensive, exclusionary areas. The price of entry to living in North Berkeley is a $1,000,000 luxury single family home. It costs $1,000,000 to have access to its schools, its clean air, its fabulously rich culture, and its near limitless abundance of opportunity.

We can do better, and we must do better if we are to ever dismantle these barriers to opportunity that disadvantaged populations face.

East Bay for Everyone is asking its membership to Show Up for Housing. Berkeley City Council will meet to discuss this resolution tomorrow, Tuesday the 29th at 6pm. Make time to be there! You’ll be joined by dozens of others from around the East Bay and beyond in uplifting camaraderie.

Until then, email your councilperson and ask them to oppose the resolution.

Here’s a template you can use:

I am writing to ask that you prevent the city of Berkeley from turning back on its progressive values by voting against Tuesday’s misguided resolution against AB-2923. AB-2923 does not reduce or remove Berkeley’s local control over land use policies, as many might fear. Instead it requires the city to collaborate with the BART board in developing station area plans that are rich in affordable housing. If Berkeley already has plans to provide for dense, affordable housing at our Ashby, Downtown, and North Berkeley BART stations, then AB-2923 will have no impact on our city.

Please vote no on this Tuesday’s resolution.